This page gives you information about how we investigate and prosecute TT2 Byelaw offences in the magistrate’s court.

It outlines our prosecution process and covers how we make the decision to prosecute, how you can avoid it, and what to expect if you are prosecuted.

The law and you

It is a criminal offence to contravene the Tyne Tunnel Byelaws and prosecutions will be considered for contravening the following regulations:

Being the driver / registered keeper of a motor vehicle and failing to make payment of the appropriate toll through the prepayment scheme (contrary to byelaw 64) or by the deadline of midnight the day after your journey (contrary to byelaw 65) in accordance with instructions given by the operator or an authorised person, and thus failing to comply with the provisions of the Tyne Tunnel Byelaws 2021 made in pursuance of the Transport and Works Act 1992 by the North East Combined Authority (acting on behalf of the North East Transport Authority) under Article 41 of the River Tyne (Tunnels) Order 2005.

Failing to provide requested information contrary to Byelaw 68 of the Tyne Tunnels Byelaws 2021 made in pursuance of the Transport and Works Act 1992 by the North East Combined Authority (acting on behalf of the North East Transport Authority) under Article 41 of the River Tyne (Tunnels) Order 2005.

We want to explain to you the process we go through with everyone who fails to pay the appropriate toll for using the Tyne Tunnels.

We first send an unpaid toll charge notice (UTCN) to the registered keeper of the motor vehicle in question.

The UTCN allows 14 days for payment to reduce the charge by 50%. If the 14 days elapse the discounted rate will expire.

Failure to pay an unpaid toll charge in full within 28 days of the date of the notice will incur a charge in addition to the original toll charge.

This will be pursued via an external third-party debt collection agency or legal team and, if necessary, will be recovered through a UK court.

Consideration will be given to prosecute contraventions of Tyne Tunnel Byelaws in the magistrate’s court.

The decision to prosecute

We only prosecute as a last resort when all our other options have previously been exhausted. Our policy follows the principles of the Crown Prosecution Service (CPS).

Before we go forward with prosecution, a case must pass two tests:

The likelihood of prosecution

It is highly likely that you will be prosecuted – and still need to pay the outstanding UTCN(s) – if any of the following factors apply to you:

We may offer you a warning (on condition of payment of the unpaid toll notice charges) as an alternative to prosecution.

If a warning is offered, this will be confirmed in writing and the person can avoid prosecution by complying with one of the following conditions:

a) Pay the unpaid toll charges in full, OR

a) Set up a payment scheme and pay agreed minimum amounts within the time periods specified.

If a warning is offered and the conditions are not met then we will continue with our investigation, which could lead to you being prosecuted.

The majority of TT2 Byelaw prosecutions will be dealt with under the Single Justice Procedure (SJP), which allows a magistrate to deal with a case without a hearing in open court.

For cases not dealt with under the SJP, the court will issue a summons with the time and date of your hearing. This will give you the option to plead by post or in person

If you are found guilty of a TT2 Byelaw offence, the magistrate will decide the level of the fine. You may have to pay:

You cannot be sent to prison for a TT2 Byelaw offence. However, the court may decide to send you to prison for deliberately refusing to pay court fines

There are some not-for-profit organisations that could help you. Their advice is free, confidential and independent.

If you have any questions about a letter from one of our Case Resolutions Team or about a prosecution case, this section has answers to some of the most common questions. It may be useful if you have received a:

How will I know that a decision has been made to prosecute me?

If we do prosecute, you will be sent one of the following:

We will only prosecute as a last resort. You may be offered an alternative to prosecution first, such as setting up a payment plan. If this is an option for you, we’ll confirm this in writing.

What is a Single Justice Procedure Notice?

Most TT2 Byelaw contravention cases will go through the Single Justice Procedure (SJP), which means you may be able to have your case decided by a magistrate without going to court.

The SJP Notice sets out what you have been charged with and the facts of the case (known as the evidence).

You will need to respond to the notice by pleading guilty or not guilty within the deadline given on your letter.

The easiest and quickest way to do this is to make a make a plea online.

Visit GOV.UK to find out more about the SJP.

If you plead guilty

You can provide information to support your plea if you want to – for example, any mitigating circumstances. You can also give information on your finances. This will be considered if you’re found guilty and ordered to pay a fine.

A decision will be made on your case based on the written statement you give, and the evidence given by TT2 limited. This will happen without a court hearing. The decision will be sent to you by post.

You can choose to appear before the court in person if you want to – make sure you tick the relevant box on your notice. You’ll then be sent a letter with the date and time of your hearing.

If you plead not guilty

You should provide reasons for your plea, and details of any witnesses you want to give evidence on your behalf.

You’ll be sent a letter with the date and time of your hearing.

After your case has been decided

If you’re found guilty, you’ll be sent a ‘notice of fine’ telling you how much you need to pay.

You will also still have to pay the outstanding UTCNs 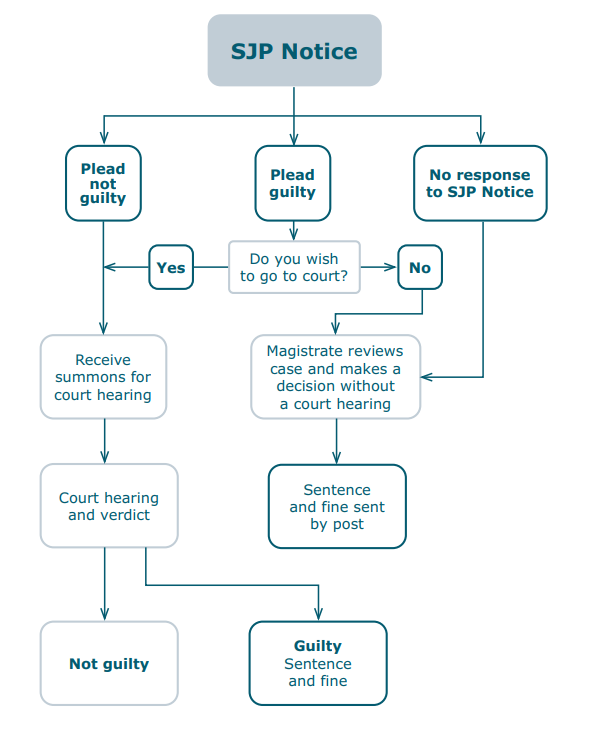 Stay up to date?