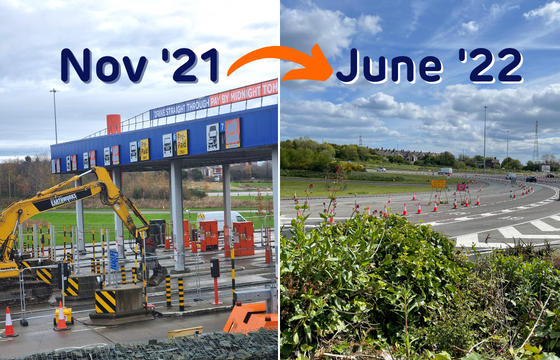 It has been six months since we switched to open-road-tolling – new data shows journey times are down; C02 emissions are slashed; and the number of people paying their toll on time, is rising.

A half-year review of all the statistics collected since the toll booths were removed in November 2021, shows a positive overall picture of our performance and that drivers have adapted well to using a cashless system.

Under the new system, cameras automatically register journeys and payment needs to be made before midnight the following day.

Since open-road-tolling was launched, we have seen more than 10.6 million journeys made and during the first month – November 2021 – 94.6% of drivers paid their toll on time. In May, that figure has risen to a healthy 96.74%.

We are on track to achieve a compliance rate of 97% by the first anniversary of the new system being launched!

Philip Smith, CEO, said: “We have delivered faster, smoother journeys, less congestion, reduced emissions and better local air quality and they were the main reasons behind the decision to launch open-road-tolling.”

Northbound journeys are now 39 seconds faster and southbound trips, 26 seconds quicker – on average across a day.

CO₂ emissions have been reduced by 90% since open-road-tolling went live. In May, the CO₂ saving equated to 2,640 return passenger flights from Newcastle, to New York.

The percentage of customers pre-paying for their journey has risen from 72% in November to almost 78% last month.

Philip Smith explained: “We were fortunate to follow in the footsteps of open-road-tolling launches at the Dartford Tunnel and the Mersey Crossing, and we have benefitted significantly from many of the lessons they learned.

“Of course, there have been some bumps in the road because changing a tolling system that has been in operation for decades and one that handles 18 million journeys every year is a challenge. But we continue to listen to our customers and learn how we can do better.

“The fact that we now have almost 97% of drivers paying their toll without issue, is testament to the hard work of our team at TT2 and the strong partnership we have with our client, NECA.

“We anticipated an initial spike in UTCNs as people got used to a new system and way of paying. We are pleased to see the level of non-compliance steadily falling as people get used to the new system.”

Stay up to date?